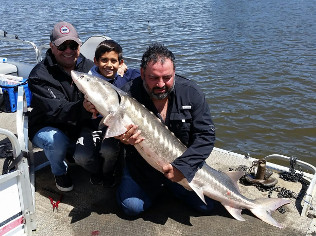 Dusty Britches here along with Yosemite Sam and Lips.

The trout bite has tapered off some, but limits still being taken. Young 8 year old Zachary picked up some nice eelers… as he describes all around the lake. Included is a 2 pound 12 ounce lightening trout using garlic scented bait. Garlic seems to be a favorite item on the menu these days for the trout.

The shoreline below Chamber’s Park tent camping area is getting a lot of attention. The pan fish bite has slowed considerable. And our afternoon visitors have finally picked up on what we’ve been throwin down regarding limits. We haven’t seen them in a while. It’s a good thing!

Well, the winds have blown through and, as a result, S.D.G.E. has reaped a fair amount of criticism. Maybe justified, and maybe not. The Lake Cuyamaca Restaurant and Store made it through with a new emergency back-up generator as did the bait and tackle

shop. Dolores Gomez took full advantage of the electricity and stayed open to serve her customers during both wind events. In speaking to some of her customers, they were very relieved and impressed with her ability to provide food and service out here at the pond.

Some of us Cuyamacaites have fully adjusted to the new standard and protocol during windy and inclement weather, some of us somewhat, and some of us either gut it out or get out until things blow over. But with the new protocol came more comprehensive news coverage by all news agencies of not only what was going on here in San Diego County with up to date reports, and a notification process using multiple ways of informing the public and updating conditions. And, comparatively speaking, San Diego County came out of these last events relatively unscathed compared to what happened up north. Even when the Sawday Fire broke outside of Ramona, Cal-Fire had already beefed up its resources here in the County, they were already sending cover units from Monte Vista to cover Julian and Cuyamaca Cal-Fire Stations and response areas, covering the back door, so to speak. I also noticed some of the volunteer firefighters showing some Cal-Fire guys water resources and directions to areas to reduce their response times. All in all, the new changes are going to take some getting use to, but as my sister always said, don’t be afraid of change.

I can’t go without an update on Koa, our new lab. Yes, rumors are true, he did eat my clipboard while I left him in the truck to get a propane tank percentage reading. One of his favorite things is chasing the chickens around the yard. He has a favorite hen which likes to go up onto the deck. He will corner it then pick it up in his mouth with what Chris Merz calls a soft bite, not to hurt the chicken, but to play with it. He will carry the hen to the other end of the deck, then set it down. Then do it over again. This happens until my wife yells at him. I don’t know if this will affect the chicken’s egg production. We’ll find out, but it’s kinda fun to watch. The chicken doesn’t seem to mind. Good training for waterfowl hunting later on I say. It may be me but his front paws seem to be considerably larger than his rear paws. I’ve noticed that it helps with his swimming considerably.